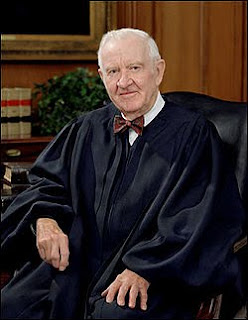 According to numerous news reports, Supreme Court Justice John Paul Stevens is expected to announce his retirement soon. As one clear sign of his impending retirement announcement, Supreme Court observers note that Justice Stevens has hired only one law clerk, instead of his usual complement of four law clerks.
Justice Stevens is the oldest Justice on the Court. According to Wikipedia, he will be 90 years old on April 20th. The liberal Justice has served on the Court since 1975.
Supreme Court observers uniformly agree that whomever President Obama selects to replace Justice Stevens is unlikely to upset the Court's current ideological balance. That could occur in the future, however, if even one of the current conservative Justices ever leaves the Court during President Obama's term. What do you think about these developments?
Posted by Richard at 11:08 AM