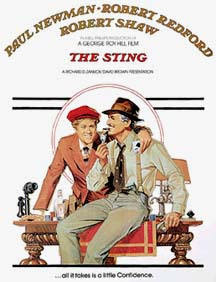 How about a little change of pace?! Let's talk about another one of our favorite movies involving white collar crime! One of my "top 100" favorite movies is "The Sting." This 1973 film starred actors Paul Newman and Robert Redford as grifters who pulled off a big sting against a Chicago mobster, played by Robert Shaw.
The movie was reportedly based on the true life escapades of con artists Fred and Charles Gondorff. Of course, one of the best parts of the movie is the music! The movie's well known score and other pieces are the work of famous ragtime musician Scott Joplin, as adapted for the movie by Marvin Hamlisch.
What are some of your favorite movies about white collar crime?
Posted by Richard at 6:28 AM No comments: 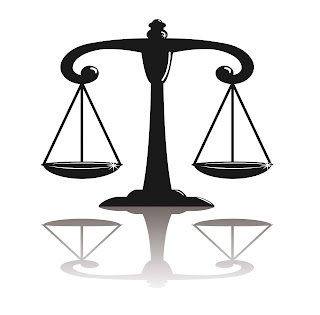 Everyone is familiar with the old Gladstone adage that "justice delayed is justice denied." Well, the Supreme Court of Georgia has just given new meaning and some real "oomph" to this old quote.
The State of Georgia's highest court recently dismissed murder charges against two men, Maurice Gleaton and Antonio Clark, because the Fulton County District Attorney's Office took too long --four to five years-- to bring the case to trial. Gleaton and Clark had been charged in connection with the August, 2005 shooting death of a man at an Atlanta apartment complex. Can you believe it took nearly five years for the state to get ready?! Don't you agree that it is outrageous that it would take so long for the state to prepare a criminal case for trial?!
In dismissing the murder case, the Court was clearly focused on the prejudice to a defendant's constitutional rights when a speedy trial is denied. For instance, in this case, the location where the crime had occurred had apparently been condemned and torn down. As a result, no physical evidence could be retrieved.
This criminal case is illustrative of a serious problem facing our criminal justice system. And believe me, trial delays are not confined to Atlanta, Georgia. Our courts everywhere are generally bogged down and over-burdened with more cases than our criminal justice system can efficiently handle. In my opinion, (as a former federal and state prosecutor, and presently, as an Augusta, Georgia criminal defense attorney), prosecutors' offices must learn to more effectively screen their cases and develop better strategies to address criminal case backlogs. It can be done!
No matter where you stand on the poltical spectrum, hopefully you will agree that a five year delay beween a crime and trial is patently unfair and absurd. It is unfair to the defendant, just as it is also unfair to the victim's family members!
After all, as the Georgia Supreme Court has just re-affirmed, "justice delayed is justice denied!"
Posted by Richard at 9:14 AM No comments: 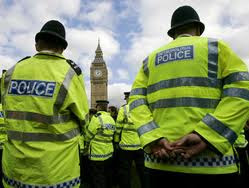 In addition to being a former federal prosecutor, (and currently, a criminal defense attorney), for many years, I have also been a part-time criminal justice professor at a local university. One of the courses I teach is aptly called, "White Collar Crime."
But I still haven't gotten to the point of this post. My point is that the textbooks for college courses dealing with white collar crime tend to over-emphasize size when they provide illustrations of fraud, corruption, and other white collar crimes. In other words, criminal justice textbook authors tend to focus almost exclusively on the "mega cases," such as the Enron corporate fraud case, or the Madoff investment fraud case.
But look around you. The simple truth is that most white collar crime cases are relatively small theft and fraud cases committed in every community around the globe. For instance, today, I read in the news about a student who was arrested in London for leaving upper scale restaurants without paying for meals. Also, closer to home, I read that four men have been arrested for operating a small-scale gambling operation.
Again, the point is that college textbooks, by focusing only on the big cases, fail to recognize that most white collar crimes are actually just "small potato" cases committed by ordinary folks. The textbooks make it appear that all white collar crimes are big crimes, but most are not. So, in one sense, size really doesn't matter, at least when you are defining white collar crime!
Don't you agree?
Posted by Richard at 1:42 PM No comments:

Did you hear the news out of Prince George County, Maryland? According to The Washington Post and numerous other news outlets, Prince George County Executive Jack Johnson and his wife were arrested yesterday by F.B.I. agents, who allege that the two had destroyed evidence in connection with an ongoing federal probe of public corruption and kickbacks in this Washington, D.C. suburb.
According to reports, the feds have been wiretapping Mr. Johnson for quite some time concerning alleged kickbacks which they claim he has received from real estate developers in connection with HUD grant money. Johnson maintains his innocence and asserts that he will be vindicated when the truth comes out.
Here's hoping that Mr. Johnson and his spouse get some good criminal defense lawyers who are experienced in federal criminal cases! As a former federal prosecutor, (and currently, as a criminal defense attorney in Augusta, Georgia), I can attest that, facing an F.B.I. federal wiretap case, they are going to need all the help they can get!
Posted by Richard at 10:03 AM No comments:

"We felt like we had to find him guilty. Even his own defense lawyer looked like he thought his client was guilty!"
I will never forget these words spoken to me by a jury foreperson in a case I had just tried. As a young Assistant D.A. in Augusta, Georgia, I had just gotten a conviction in a tough murder case. After the case was over, I was interviewing the jury foreperson.
The evidence in the case was largely circumstantial. The defendant was accused of strangling his girl friend to death. She was found dead in a local motel room. We could prove that the defendant had checked in at the motel with his girl friend and that she was found dead, in bed, by a maid the next morning. As I recall, the only other evidence we had was the testimony of a cell mate of the defendant, who testified that the defendant had admitted strangling the girl friend. That's about all the evidence we had! But the jury still convicted the defendant, in part, as the jury foreperson explained, because it appeared to the jury that even his own criminal lawyer thought he was guilty!
I learned several important lessons from this criminal case. First of all, it reminded me that you never know what a jury will do! Also, I learned to always tell my clients, (in my current career as a criminal defense attorney), not to talk with their cell mates, (or anyone else), about their case. Finally, I learned that, during a criminal trial, it is critical for a criminal defense lawyer to always maintain a "poker face," no matter how the trial is going.
After all, you never want a jury to convict a client simply because it appears to the jury that his own criminal lawyer looks like he thinks he is guilty!
Posted by Richard at 10:29 AM No comments:

Criminal Law "Joke of the Day"

We criminal attorneys have been far too serious for far too long in this blog about white collar crime in Georgia! So...don't you agree that it is high time for a ..."joke of the day!?"

The story goes that two people, a priest and a criminal lawyer, had died and were approaching the Pearly Gates together. They each identified themselves to St. Peter, who agreed, in turn, to take them to their assigned Heavenly accomodations. He took the priest to a humble house, but then he showed the criminal attorney a beautiful mansion. The priest was flabbergasted! He asked St. Peter, "Tell me, why does this money-grubbing, underhanded criminal lawyer get to live in this mansion, while I, a priest, who has helped the poor and the sick, am assigned a humble house?"
"Well," replied St. Peter, "We get preachers and priests here all the time, but this is the first criminal lawyer we have ever had!" Have a great day!
Posted by Richard at 9:03 AM 1 comment: