White Collar Crime, the Salvation Army, and the Holidays

The holidays are here, so, hopefully, that means that there is a lot of "peace and goodwill toward men." But unfortunately, it also generally means that crime is everywhere. too. Just pick up any newspaper or check any news website. It will quickly show you that -- in addition to "joy to the world" -- the holidays also bring a lot of crimes and crime victims to the world, too.

One news report which caught my eye today occurred in Toronto, but it could have been anywhere. The reported case involves the alleged theft of approximately $2 million worth of toys from a Salvation Army warehouse by a Salvation Army Executive Director, David Rennie. Of course, all defendants are entitled to their day in court and the burden of proof remains on the prosecution.

But the facts of that single case aren't the point here. The point here is that, while we should all enjoy the holidays, we should also remember that there is a lot of crime "out there" and a lot of innocent crime victims who are suffering at this time of the year.

Maybe we should all put a little extra in the kettle. What do you think?

Posted by Richard at 1:24 PM No comments:

Yesterday, we learned more about the anticipated resolution of criminal charges by the BP Oil Company with the Department of Justice. The charges, of course, relate to the Gulf of Mexico oil spill--the worst offshore oil spill in U.S. history. According to news reports, BP has settled its own (corporate) criminal liability by pleading guilty to felony misconduct and agreeing to pay a total penalty of about $4.5 billion over the next six years.

This announcement by the U.S. Department of Justice pertains only to BP's corporate criminal liability. Other criminal charges against several executives, along with some civil claims for damages, remain unresolved.

What do you think about this resolution, which is the largest monetary penalty imposed in U.S. history? Was it enough?
Posted by Richard at 5:56 AM No comments:

The Goolsby Law Firm Brag Board! 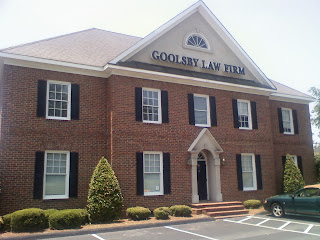 Please allow me to brag a little bit today. My second son, Blake Goolsby, has successfully passed the Georgia Bar exam and has now been sworn in as a licensed Georgia attorney! Blake has now joined his brother, Richard H. Goolsby, Jr., and me, (his father, Richard H. Goolsby, Sr.), in our family law practice, here, in Augusta, GA. We will continue to handle Augusta area divorce cases, personal injury cases, criminal law cases, and other general litigation -- but now, our family of lawyers is just a little bit bigger!

Now, I hope you can understand why I am so happy today!

A Goolsby "War Story:" The Case of the Mysterious Purse

Have you ever been in a situation in which you sensed danger and realized you needed to think fast in order to escape it? Consider the following fact-based "war story" from my days as a federal prosecutor.

I will never forget how tired I felt that afternoon. I was an Assistant U.S. Attorney in Augusta, Georgia. Several months earlier, I had fought for the opportunity to handle the prosecution of a major healthcare fraud case. This was a major white collar criminal case --a career-making case -- which had made the news headlines nearly every day. Ever since my assignment, I had been working hard, seven days a week.

On this particular afternoon, I was sitting at my desk and reviewing some boring F.B.I. 302s, (investigative reports of witness interviews). The U.S. Attorney's Office receptionist buzzed and told me that a lady, a Ms. Johnson, was up front, waiting in the reception area. The receptionist didn't know exactly who this visitor was or why she was there to see me.

When I opened the door which divided the inner offices from the reception area, I immediately saw a middle aged woman who was neatly dressed. I still had no idea who she was. I also quickly noticed that she seemed emotionally distraught and that, oddly, she had one of her hands inside her purse.

I introduced myself to her and asked if I could help her. She proceeded to tell me that her name was Irene Johnson. She added that she was the wife of Jim Johnson. I also noticed that she continued to fumble with her purse -- nervously opening and closing it as she talked.

Immediately, I realized who she was. I had learned from my case agent that her husband had just been fired by the big healthcare company which was the target of my federal grand jury investigation. According to the local newspaper, Mr. Johnson, her husband, had confronted his boss about alleged wrongdoing at the company. As a result, the boss had just given her husband the ax.

Even though I was not the guilty party who had fired her husband, I soon realized that this lady, as she continued to ramble and vent her anger, somehow blamed me, and our federal investigation, for their predicament.

And again, I watched as she kept fumbling with her purse, and kept putting one hand in it, as she continued to ramble on and on about how I didn't realize the damage I had caused her family.

Then, I started getting a little nervous. I was unsure what to do. Now, this woman was getting all worked up and chewing me out! And I had an errie feeling, and a sense of danger, but, still, I couldn't be sure about what I faced. Naturally, I couldn't see what was in her purse, but, just as naturally, I feared she had a pistol in it. To this day, I truly believe that she had a gun and that she was undecided about whether or not to use it. Maybe, I believe, she simply wanted to speak her peace before she took her revenge against me.

I quickly considered my options. I calculated that it would be difficult for me to attempt to tackle her, from across the room, before she snatched out her gun and shot me. But still, that seemed like one good option. However, on the other hand, I still just couldn't be sure she even had a weapon. I certainly didn't want to face the embarrassing prospect of taking down an innocent person who was simply reaching in her purse for a tissue! How would that look in the local newspaper? Nevertheless, I knew I needed to do something quick. I was in a situation in which I sensed that I needed to think and act fast, or possibly face dire consequences!

So, rather than tackling her, I decided to try a different approach. I chose to put on my best preacher's son's hat. In short, I elected to try to talk with her and show her some compassion. I proceeded to let her know how sorry I was about her predicament and, then, I told her that I would pray for her and her family.

That's what did it. That's what worked! I believe that when she saw that I was not a cold government prosecutor, but simply a nice young man doing his job, it melted her resolve to do what, (if anything), she might have been contemplating. But I don't want to overstate things. I didn't completely disarm her with my charm! Ms. Johnson did not smile at me, nor did she offer any apology. She seemed confused. Without a parting word, but after hearing I would pray for her, the flummoxed Ms. Johnson simply closed her purse, turned, and left.

Did she really have a gun? Did she really intend me harm? I will never know for sure. But I do know that, sometimes, when you sense danger, you had better think and act fast in order to escape!

And yes, I did pray for her. But you'd better believe that I never again entered the reception area of the U.S. Attorney's Office without first knowing who was waiting there and exactly what they were toting!