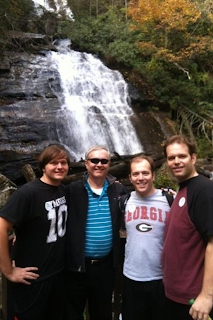 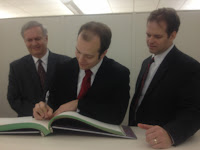 As you may know, we are the Goolsby Law Firm, LLC, which is composed of father and son attorneys who enjoy practicing law together in Augusta, Georgia. But we also enjoy having fun together, as shown in the top photograph of me and my three sons on a recent hiking trip in the Georgia mountains! The second photo shows my second son, Blake, following his recent swearing in at the Augusta courthouse! I feel very blessed to get to practice law with my sons, and to share good, practical tips and information in this blog for you to discuss with your own criminal lawyer!
Posted by Richard at 8:51 AM No comments:

We have discussed before in this blog about the problems of vandalism and thefts from churches, along with the exploding copper theft epidemic. This past week, both problems intersected. As reported by various news agencies, someone stole part of the copper roof and gutters from the Palisades Community Church in Washington, D.C., (not pictured above).

As a former federal prosecutor, (and currently, as an Augusta, Georgia criminal defense lawyer), here's hoping that D.C. police catch the crooks responsible for this theft. Here's also hoping that there is a "special" place in Hades for anyone who would steal from a church!

What do you think?
Posted by Richard at 3:19 PM No comments:

Legal Question of the Day: Is Use of Drones to Kill American Citizens Okay?

So, here is the "legal question of the day:" Do you believe that using unmanned drones to kill American citizens, on U.S. soil, who are suspected of terrorist activities would be legal?

The Attorney General, Eric Holder, has stated his opinion that such an action would be legal and justified. On the other hand, yesterday and last night, U.S. Senator Rand Paul, during a thirteen hour-long filibuster of the confirmation of John Brennan as C.I.A. Director, countered that such strikes would violate our Constitution.

Who is right? What do you think?