It's Moving Day at The Goolsby Law Firm! 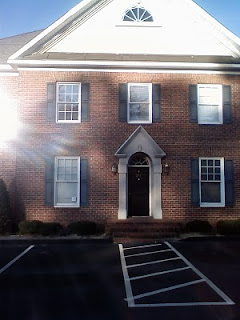 I am sorry that I haven't been around to dispense legal wit and wisdom this week! You see, I have been very busy. It's moving day at the Goolsby Law Firm!
No, this blog hasn't moved anywhere. But our "brick and mortar" location has changed! Our law office is now located at 233C Davis Road, Augusta, Georgia. (I took the photo above early this morning with my cell phone!) For those of you outside Augusta, that information won't tell you much! But hopefully, most folks in Augusta will realize that our new law office location is more centrally located. In short, we are now located near the intersections of many of Augusta's major highways.
Also, we are now located about half-way in between the courthouses in Augusta and Evans, Georgia. There are the two courthouses where much of our legal business is conducted. So, it will now be much easier and quicker to hop on a horse and get to either courthouse! My son and I will continue to handle divorces, (along with child custody, adoptions, and other family law cases), personal injury and medical malpractice cases, defense of criminal law cases, (in both state and federal court), and other general litigation.
So, that's what we have been up to this week at the Goolsby Law Firm! (Now, I've got to get back to work!)
Posted by Richard at 6:29 AM No comments: 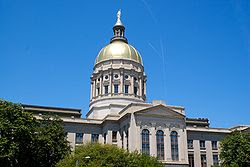 I recently climbed aboard the soapbox to rail against a Georgia legislator's proposal to increase the filing fees in civil cases in Georgia. As I pointed out, if our legislature isn't careful, they could make filing a simple lawsuit so expensive that our court system becomes out of the reach of average citizens. But the problems at our state capital continue.

It appears that several legislators are also now threatening to eliminate up to 19 superior court judgeships statewide. In addition, they also have threatened to cut the salaries of Georgia judges. I realize that Georgia, like many states, faces a severe budget shortfall. However, in my opinion, it is a mistake to damage, perhaps irreparably, our court system through such draconian cuts.

For instance, mothers who need child support can't afford to wait months and months longer to get a court hearing, because there are fewer judges to hear their cases. And criminal cases already take months, and sometimes years, to get to trial. Hopefully, our legislators will find other ways to meet budgetary needs without such severe consequences to Georgia judges and litigants.
There now--I feel better and can climb down off the soapbox!
Posted by Richard at 7:38 AM No comments:

Here is a quick "tip of the day!" This blog post is certainly not directed at any of our current clients, or at anyone else in particular. But in this post, I want to make an important point which might be helpful to anyone who enters into an attorney-client relationship. The point is that you should always trust and confide in your criminal defense lawyer completely!
It seems that some people hesitate about telling their own lawyer everything. Perhaps they don't want their own attorney to think less of them. Or maybe the client even has a problem admitting to themselves the full extent of their predicament.
However, it cannot be over-emphasized that it is critical that you find a good, experienced criminal lawyer in whom you have complete confidence to tell everything: the good, the bad, and the ugly! To be in the best position to help you, your criminal lawyer must be armed with all the facts and your complete trust and confidence.
This is the probably one of the best tips I could give anyone today!
Posted by Richard at 6:51 AM No comments:

A. The Fort Hood Murder Case, Contacts With the News Media, and "Wrestle Mania:"
Have you read about the flack being caught by a defense attorney who is defending the alleged killer in the Fort Hood murder case? In my opinion, based upon all the published reports, that case is beginning to resemble a "Wrestle Mania" press conference! Folks are now complaining because the defense attorney has reportedly posted some comments, critical of the government, in his blog. To complicate matters for the criminal defense lawyer, the judge in the Fort Hood case has also reportedly entered a gag order in the case, which generally means that the lawyers aren't supposed to talk about the case in the news media. In my opinion, the criminal lawyers had better be careful! While what an attorney can say to the news media varies from place to place, an attorney should always be careful not to violate a judge's gag order, or state bar or local court rules.
B. Issues Raised By the Fort Hood Case:
Now, I haven't seen the criminal lawyer's blog, so I don't know what he said about the case. Nor have I seen the judge's gag order. As a result, I have no comments or opinions about the propriety of this criminal defense attorney's comments. But that situation raises some interesting issues about which I do have an opinion!
C. My Opinions and Conclusions About Contact With the News Media:
In my opinion, the government is often more guilty than the defense of using the news media to prejudice the public against the accused. For instance, in criminal cases, particularly high profile criminal cases, the government will often conduct press conferences, (as depicted in the "Wrestle Mania" photograph above!), in which prosecutors and law enforcement officials will sometimes "body slam" the reputation of the accused. In addition, those same public officials will often issue press releases which may also prejudice a criminal defendant's right to a fair trial. They also sometimes talk to the media "off the record." Finally, the feds are also particularly notorious for arresting white collar crime defendants and parading them, handcuffed, in front of the news media in "perp walks." (I am proud that, during my 20 year career as a federal prosecutor, I never authorized a single "perp walk!")
So, in my opinion, the bottom line is that the government should be held to the same standards as the defense. This is particularly true because a criminal defendant has a Constitutional right to a fair trial by an impartial jury!
Now, please let me be clear! I am not using these examples of government abuses to attempt to justify a criminal defense lawyer's comments in a blog. But I am attempting to make a point that, sometimes, the government is even more guilty than the defense of trying to score points in the court of public opinion. In my opinion, both sides, prosecution and defense, should avoid trying to use the news media to try their cases. Put another way, criminal cases should be tried inside the courtroom; not outside on the courtroom steps. In short, both sides should leave the wrestling and the press conferences to the "rastlers!"
Posted by Richard at 6:42 AM 2 comments:

I realize that this news may not excite many of you, but Supreme Court watchers are keeping a close eye on anticipated rulings in several important criminal cases.
I. "Honest Services" Mail Fraud:
For instance, former Enron CEO Jeff Skilling is awaiting a ruling from the Court concerning his appellate issue about "honest services" mail fraud. The issue concerns whether or not this statute is too vague, along with questions about whether federal prosecutors are using the federal statute in inappropriate ways to go after alleged crooked politicians and business people.
II. Appeals Involving Miranda Warnings:
In addition, the Supreme Court is expected to rule in a couple of appeals concerning whether or not the police improperly used or gave the Miranda warnings. In one case, the Court will decide whether officers can interview a suspect who has indicated that he understood his rights, but hasn't invoked them. In another appeal, the Court will decide whether an invocation by a suspect of his right to counsel can expire. The Court always seems to have an interest in making sure the police properly advise arrested suspects of their Constitutional rights.
So, have I piqued your interest in what the Supreme Court may decide in these criminal cases? Aren't you just filled with anticipation?!
Posted by Richard at 2:06 PM No comments: