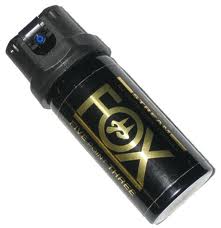 [Pepper spray can photo from thegunsource.com]
Okay, today, I have decided to climb back up on my soapbox to complain about a growing trend in some police departments!  It involves the occasional misuse, in my opinion, of tasers and pepper spray on kids.  In particular, I want to rant today about the Colorado police officer's decision to use pepper spray to subdue an 8 year old second grader.  You probably have read or heard about this incident in which the kid apparently went berserk in class and reportedly threatened his teacher and later, the police, with a piece of wood.
Look, every situation is different.  Moreover, we should all recognize the dangers and difficulties inherent in police work.  Police officers must often make snap judgment decisions about how to defuse dangerous situations.  However, in my opinion, this particular situation, and this particularly small child, did not warrant the use of (what I consider to be) excessive force to subdue him.  Arguably, other methods should have been tried first.
Please don't think that, just because I am a criminal defense lawyer in Augusta, Georgia, I have gotten soft or developed an anti-law enforcement attitude.  Nothing could be further from the truth!  I have always been supportive of law enforcement.  Also, please remember, I was a prosecutor, (state and federal), for most of my legal career and I still have many friends in law enforcement!
But check it out for yourself!  In other words, if you want to test my opinion -- that there is a growing trend toward a "quick draw," by some police officers, of their tasers and pepper spray -- then simply do a quick internet search.  You might be surprised to see the number of reported incidents in which police officers have used such force against small children!
There, I feel better now!  I can get back down off the soapbox!  What is your opinion about this case?  Should police officers use tasers or pepper spray on small children?
Posted by Richard at 7:23 AM