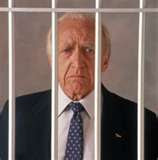 I want to start a new periodic series in this blog about what it is like to be a federal prosecutor and how, as a former AUSA, I "put together" some of my major prosecutions. Trust me, a lot of planning and hard work goes into many federal criminal investigations. I also want to discuss some of the special challenges I faced, as an AUSA, in prosecuting high profile criminal cases.

As a former federal prosecutor in Augusta, Georgia, I was very lucky to be in the right place at the right times to try some of the largest federal fraud and public corruption cases in Georgia (and United States) history! For example, I tried the largest home healthcare Medicare fraud case and the largest vote-buying case in American history. But big cases often bring big challenges. For example, consider the following:

1. No Precedents to Guide You:
Being a federal prosecutor sometimes feels like being a Star Fleet Commander in Star Trek. Simply put, you confront new problems and new worlds never seen before! Put another way, for some of my major fraud investigations, there were no precedents to guide me. Now, don't get me wrong. The U.S. Department of Justice provides excellent resources and unparalleled training opportunities for federal prosecutors. But my point is that, in some of my major criminal cases, there were no prior criminal cases, or precedents, just like mine, and I was pretty much on my own to face them.

For example, I once prosecuted a major home health care fraud case in which the home healthcare agency owner was accused, among many other allegations, of falsely billing the Medicare and Medicaid programs for tens of thousands of dollars for a luxury Georgia Dome stadium suite, liquor, and parties. I had to determine whether or not this constituted Medicare fraud, i.e. a criminal matter, or whether it was simply a civil matter. In that case, I decided to include some of the allegations, (e.g. billing Medicare and Medicaid for tens of thousands in liquor billings), in my indictment, even though I could find no clear precedent. Fortunately, I prevailed later at trial! I could give you countless other examples.

The point is that, because there were no precedents, as a result, I often had no prosecution models, or sample indictments, to guide me. Instead, I had to do my own research, lead my own task force of agents and auditors where I wanted to go, and draft my own indictments. In other words, as a federal prosecutor, you sometimes must first research and determine whether or not the target's activities are criminal before you can really begin to prove it occurred.

But frankly, I enjoyed this special challenge of federal prosecution. I had a unique opportunity, as an AUSA, to "boldly go where no one has gone before!"
Posted by Richard at 10:06 AM