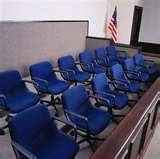 They don't teach you everything in law school. For example, law school doesn't prepare you for jury selection in some south Georgia counties. Consider the following "war story" from my early days as a prosecutor.
I was a new Assistant D.A. I had been thrown in the deep end by my boss, the D.A., who had given me the entire caseload of criminal cases to try in Brooks County. I guess he figured it was time for me to sink or swim!
Can you imagine how extremely nervous I was the first morning of jury selection!? I had never picked a jury before and really didn't know what to expect. But I learned something new that morning. I learned that, in Brooks County, you didn't need to know much about jury selection. And the reason centered around Sheriff Wilbur Gilbert.
Here is how it worked. Just before jury selection, Sheriff Gilbert would assume his perch in a chair in front of the judge's bench, facing both the jury box and the prosecution table. Then, after each prospective juror stood and answered a few voir dire questions, I would look at the Sheriff and the Sheriff would respond by either vigorously shaking his head up and down, or left to right. Then, I would follow the Sheriff's lead by simply standing and announcing my acceptance or rejection of the juror.
Incredibly, this "method" of jury selection was "out there" for everyone to see. In other words, Sheriff Gilbert made no effort to hide his gesticulating or head shaking. Pretty soon, each juror began looking at the Sheriff for his decision about their fate before I could even announce mine! But I didn't care! The Sheriff had made my life a little bit easier and helped me get over the nervous heebie-jeebies! And we got the job done!
I learned a lot about trying criminal cases during that trial week. But I also learned that they don't teach you about the South Georgia Gilbert jury selection method in law school!
Posted by Richard at 5:55 AM