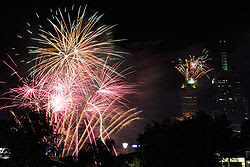 You would think that nightclub owners around the world would have already learned about the liability and prosecution risks of allowing performing groups to use pyrotechnics in their clubs. You would also think that they would want to maintain a safe environment for their patrons. Yet, last week, another such tragedy occurred when a Moscow club caught on fire, as a result of a pyrotechnics problem, and 112 people were killed. As you may recall, this tragedy follows a similar case in Rhode Island in 2003 when 96 patrons were killed in a club fire as a result of a pyrotechnics mishap. According to Wikipedia, other similar incidents, including one at an Ecuador nightclub, have also occurred elsewhere around the world.

Business people should be aware that prosecutors around the world are now prosecuting club owners and others who are responsible for these incidents. But here's hoping that those in positions of responsibility will act more responsibly and avoid such tragedies in the future.