Corporate Fraud and Conspiracies: Who Do you Prosecute? 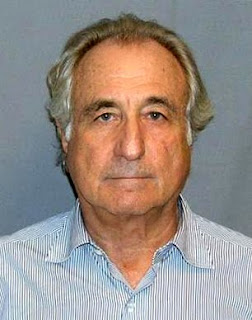 I am sorry about posting again the photograph of convicted ponzi scheme defendant, Bernie Madoff. Based upon his crimes, he doesn't merit the attention! But his fraud case presents a number of interesting issues.

For example, in Madoff's case, it has been reported that investigators are still out there "looking at" some of Madoff's relatives and associates to determine whether to try to lock up anyone else. This raises an interesting question: How do agents and prosecutors determine exactly who all to target in a criminal investigation?

As a former federal prosecutor, I had a fairly simple, straightforward approach. I generally "followed the money" and, unless you were a top executive, or ringleader, who clearly directed and knew about, and directly profited from, the fraudulent scheme, I probably wouldn't try to "make your day" by prosecuting you, even if you had some inkling as to what was going on.

In other words, as a former corporate fraud prosecutor, I generally focused on prosecuting only the primary movers and shakers who put the ill-gotten gain in their pockets and I left alone the salaried, lower level employees, such as secretaries or book-keepers, who merely did what they were told to do. I also generally stayed away from prosecuting family members, unless they were clearly key participants in the fraudulent scheme.

But you need to be aware that other federal prosecutors sometimes utilize a different approach! In other words, I have known some government prosecutors who aggressively target everyone who participated in the scheme. Then, they gamble that they can "roll over" the lower level employees against the top targets. Please don't get me wrong: Prosecutors should be aggressive. However, in my opinion, some prosecutors simply go too far! They allow their own competitive spirit and healthy egos to determine who should be targeted. They also sometimes ignore the human costs.

And can I be honest here? In my opinion, some overly aggressive government prosecutors also lack appropriate human compassion for the people whose lives they are ruining! I will never forget the inconsiderate words of one prosecutor about a target: "It must s_ _ k to be him!"

As a result, if anyone "out there" who is reading this post is a family member or associate of Mr. Madoff, you should get down on your knees and pray that you are being investigated by a government prosecutor who possesses both some common sense and a little human compassion! Otherwise, you may have to face the consequences of being persecuted by a federal prosecutor who is simply interested in putting more notches in his or her holster!

What do you think?
Posted by Richard at 9:40 AM