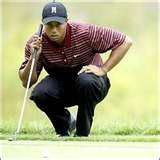 As of this writing, Tiger Woods has been discovered bleeding and semi-conscious in the street outside his Florida home. His wife has reportedly told authorities that she broke the rear window of his Cadillac SUV, after she allegedly heard him have an auto accident outside their home at 2:30 in the morning. The Enquirer reports, (i.e. gossips), that he has allegedly engaged in an affair. Thus far, Tiger has refused to talk with police. Yes, these and other facts all sound suspicious. But this isn't a celebrity gossip blog! And such gossip is not our business and not the point of this post!
So, let's just focus here on a point I tried to make in an earlier post, (and illustration), about Martha Stewart. You may recall that I observed that, if Ms. Stewart had simply come clean and told the truth, in the beginning, about receiving the insider trading tip, she might have avoided prosecution. And the point here is that, in my opinion, Tiger should simply tell the truth. In my opinion, the worst thing that Tiger can do at this juncture is to lie to the police, (and public). In my opinion, this will only lead to a long, drawn out police investigation and potential police charges for making false statements. Instead, I hope that Tiger will, perhaps through his attorneys, find a way to cooperate with authorities and tell the truth to avoid further legal problems.
Tiger Woods has always shown sound judgment and impeccable integrity. His judgment on the golf course is unsurpassed. Here's hoping that he will likewise avoid the potential traps and show good judgment off the golf course, too!
What do you think?
Posted by Richard at 7:41 AM