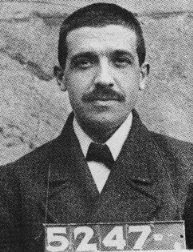 Have you ever heard of Charles Ponzi? No, you youngsters, I am not referring to that cool character, Fonzi, from the 1950's-based t.v. series, "Happy Days!"

Instead, I am talking about the original con artist, Charles Ponzi, who was prosecuted for investment fraud back in the 1920's, and for whom the term "ponzi scheme" is named.

According to Wikipedia, a ponzi scheme refers to any "get rich quick" investment scheme in which the con artist falsely promises a high investment return, which never materializes, and then uses some of the investment money obtained from later investors to repay some of the earlier investors, in order to keep the scheme afloat.

The original Ponzi's crimes pale in comparison to the crimes committed by Bernie Madoff, who was sentenced in June to serve a whopping 150 years in prison. And did you hear the news earlier today that one of Bernie Madoff's assistants, David Friehling, has entered a guilty plea for his role in helping Madoff rip off investors for a record $64.8 billion, according to Wikipedia?

Ponzi may have had the crime named after him, but it appears that Madoff, with help from others, perfected it. Maybe we should re-name it the "Madoff scheme," in his (dis)honor. And trust me, Fonzi wouldn't believe Madoff's crime was cool!
Posted by Richard at 11:19 AM