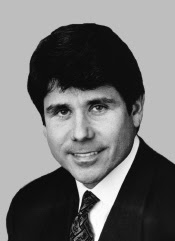 By now, everybody has probably heard* that former Illinois Governor Rod Blagojevich nearly beat the federal criminal case against him earlier this week. In other words, there was a hung jury on all but one count against him--a charge of making false statements to a federal agent. But here are some valid reasons why, in my opinion, Blago is making a big mistake in making the rounds and boasting on the t.v. talk and news shows, while protesting his innocence and daring the government to re-try him on the "hung jury" counts.

First of all, Blago probably should be careful about sticking his finger into the eyes of the federal prosecutors in his case! Not only will they "make his day" by re-trying him, but also they will likely "make his day" by seeking the maximum sentence if he is convicted on the additional counts.

Second, did you know that, in federal court, the judge may consider, as "relevant conduct," even the conduct in acquitted counts in imposing sentence!? The bottom line is that, even though Blago was convicted only on one count, under the federal sentencing guidelines, the judge may zap him as though he was convicted on all counts!

Finally, as a criminal defense lawyer, (and former federal prosecutor), I would be afraid for such a client like Blago--afraid that the sentencing judge may see him boasting on t.v. and want to "make his day" by sentencing him to the maximum, too!

So, somebody out there, (hopefully, his own criminal defense lawyers), should, in my opinion, tell Blago to stop his boastful bloviating!
[*No, the use of the black and white picture of Blago above does not mean that he just got voted off the t.v. series Big Brother, too! It's just the easiest picture I could find! Besides, Blago could probably win Big Brother, don't you agree!?]
Posted by Richard at 1:45 PM