Lindsay Lohan: To Leak Or Not To Leak? To Deal Or Not To Deal? 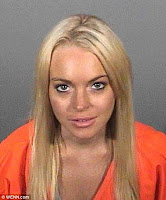 With all the ranting and raving by and for actor Charlie Sheen, perhaps you had forgotten all about the troubles and travails of actress Lindsay Lohan!  But now, Ms. Lohan is back in the picture!  You may recall that she faces a felony charge for allegedly stealing a necklace from a Venice, California jewelry store.  Ms. Lohan and her attorney maintain that this was just a big mistake and point out that the necklace was quickly returned.  Well, now, according to various news reports, the actress has allegedly refused a plea bargain deal which might have resulted in jail time for the alleged theft.  I have a couple of reactions, as a criminal attorney, to this news report and talk about plea bargaining.
1.  LEAKS TO THE NEWS MEDIA IN HIGH PROFILE CRIMINAL CASES:
First of all, as a former federal prosecutor and, currently, as an Augusta, Georgia criminal defense attorney, I am appalled that private discussions about potential plea bargains are being leaked and aired in the news media!  This is outrageous and unfair to Ms. Lohan and to any other criminal defendant who is in her position!
2.  DEFENDANTS SHOULD DECIDE WHETHER TO "DEAL OR NO DEAL:"
And second, this case also illustrates the important point that, in our criminal justice system, each defendant should be the one to decide whether or not to accept a plea bargain, or whether to go to trial.  In other words, it is not up to a criminal lawyer, or anyone in the news media, to decide whether to accept a deal.  Of course, let me emphasize that, in this case, there is absolutely no indication that anyone is pressuring Lohan to cop a plea.  But I simply wanted to make a point that, in my experience, in other criminal cases, I have heard of criminal lawyers who will "lean on" their clients to accept a deal.  As a criminal defense lawyer, I find this practice to be appalling!  I would never push a client to plead guilty to anything!  And in this case, only Ms. Lohan, after consulting with her criminal defense attorney, should decide whether to "deal or no deal."   Don't you agree?
Posted by Richard at 7:16 AM