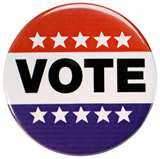 As we approach election day, I remember some of my "war stories" from my days as a federal prosecutor, during which I prosecuted the largest vote-buying case in U.S. history. In that case, I successfully prosecuted a total of 28 defendants for buying votes in Dodge County, Georgia, including a sheriff and two county commissioners. I wish I could say that I "cleaned up Dodge," but the U.S. Attorney's Office was required to "make a little visit" there again and lock up some folks not too long ago!
Election problems and voting fraud continue to pose a serious problem in this country. Consider the following examples:

Election fraud is a serious problem which strikes at the heart of our Constitution. Don't you agree? Do you believe electronic (computer) voting is more safe, or less safe, than paper ballot voting?