"Queen For A Day" and Old Motels! 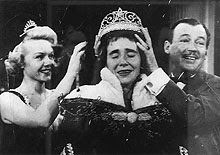 So, you might wonder, what do the old t.v. game show, "Queen For A Day" and old motels have in common, and what could they possibly have to do with white collar crime?!

Well, here is my explanation! There is a connection between the two, or at least I intend to try to make one! Have you ever heard of this old television game show which, according to Wikipedia, aired from 1956-1964? The premise of the game show was that several contestants would each offer their own personal sob story of their tragic lives. Then, the studio audience would vote on who deserved to be "Queen For A Day" and the winner got a crown and a new washing machine!

Being a "queen for a day" also has a special connotation today in criminal law. It is a term often used to describe a person who agrees to meet with government agents to discuss a possible deal. The government agrees that, during the off-the-record meeting, nothing you say will be used against you. You are, in essence, a "queen for a day!" (But you probably won't get a new washing machine!)

But THAT is not the connection I intended to make here! Instead, I want to make a different point: If I could be governor, or "king for a day," I would introduce legislation authorizing the state to purchase old motels around the state for use as diversion centers. In my opinion, diversion centers are a good, less costly alternative to prisons which offer judges an alternative place to send non-violent white collar criminals. There, the check forgerers, bad check writers, and drug users can stay, in a structured, but minimum security, environment at night, while they are required to work during the day, off-site, to help pay for the diversion center's costs, and to help pay on their restitution and fines. This is such a great idea. It is not only less costly, but also it means that our prisons, which are overcrowded, could then be used to keep violent, dangerous offenders even longer! But this is an idea which is not in vogue. In fact, in our state, they are closing down, not expanding, diversion centers everywhere.

So, that is my connection between "Queen For A Day" and old motels! If I could be "king for a day," I would buy old motels and convert them into diversion centers!

And now that you have heard my sob story, won't you please vote for me to be "King For A Day," so that we can open some more diversion centers?! And if you want to give me a new washing machine, that is okay, too!

What do you think about using diversion centers as an alternative sentencing measure for non-violent criminals?